The Mediterranean diet is the world’s most studied dietary pattern and has been shown to provide valuable health benefits and reduce the risk of numerous diseases.

Extra virgin olive oil (EVOO) is the major source of lipids in the Med Diet and is consumed on a daily basis. EVOO contains powerful phenolic compounds that exert many of these known health benefits, namely hydroxytyrosol, tyrosol and their derivatives.

Understanding the chemical identity of the various phenolic compounds is critically important for furthering research and for permitting specific health claims in relation to specific phenolic compounds. However, it has been noted that some literature does not accurately define terms and can often be misleading, in some cases causing problems in translating results and outcomes. Without a doubt, there are technical difficulties; however, there is no officially defined method for the measurement of phenolic compounds, particularly in relation to making health claims, something that the European Union Legislation (EU 432/2012) has recently permitted.

According to research published in OLIVAE, key compounds in hydroxytyrosol and tyrosol “are found in olive oil mainly in the esterified forms of oleacein (3,4‑DHPEA – EDA) and oleocanthal (p‑DHPEA – EDA) as well as oleuropein aglycon (3,4‑DHPEA-EA) and ligstroside aglycon (p‑HPEA-EA), which all have significant biological activities.” However, the researchers also suggest that in particular, “oleuropein aglycon and ligstroside aglycon are terms that are not accurately defined and are often used in a misleading way.” Most notably the confusion comes from reporting the various complicated and descriptive names, “hydroxylated form, monoaldehydic form, dialdehydic form, hydrated form, open ring, closed ring, carboxylated, decarboxylated” and so forth.

During their research, Panagiotis Diamantakos1, Angeliki Velkou, Brian Killday, Thanasis Gimisis, Eleni Melliou1, and Prokopios Magiatis discovered for the first time ever, new olive oil (OO) ingredients belonging to the oleuropein and ligstroside aglycon family. The researchers suggest naming the new compounds oleokoronal, oleomissional and ligstrodial “to minimize the confusion arising from the use of complicated or abbreviated names.”

To discover the compounds, the researchers conducted screening of 2,000 varieties of OO using NMR analysis. To ensure the results were not an artifact of the extraction and dilution process, and to prove that they were real ingredients, the researchers used a EVOO sample without any solvent and put it through an excitation pulse experiment before comparing it to a diluted form of the same EVOO. The experiment revealed “the enol form 14 of ligstroside aglycon” for both EVOO samples, indicating that the ingredients were real.

At this stage, it appears that these newly noted phenolics are only present in certain varieties, or may be dependent on the production parameters of oils. 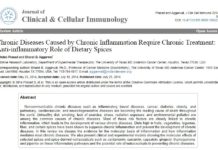 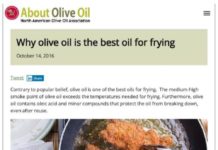 Why olive oil is the best oil for frying